Ansu Fati, 16, scored a goal and made another as Barcelona beat Valencia 5-2 while the Bundesliga leaders, RB Leipzig, came from a goal down for a 1-1 draw against Bayern Munich 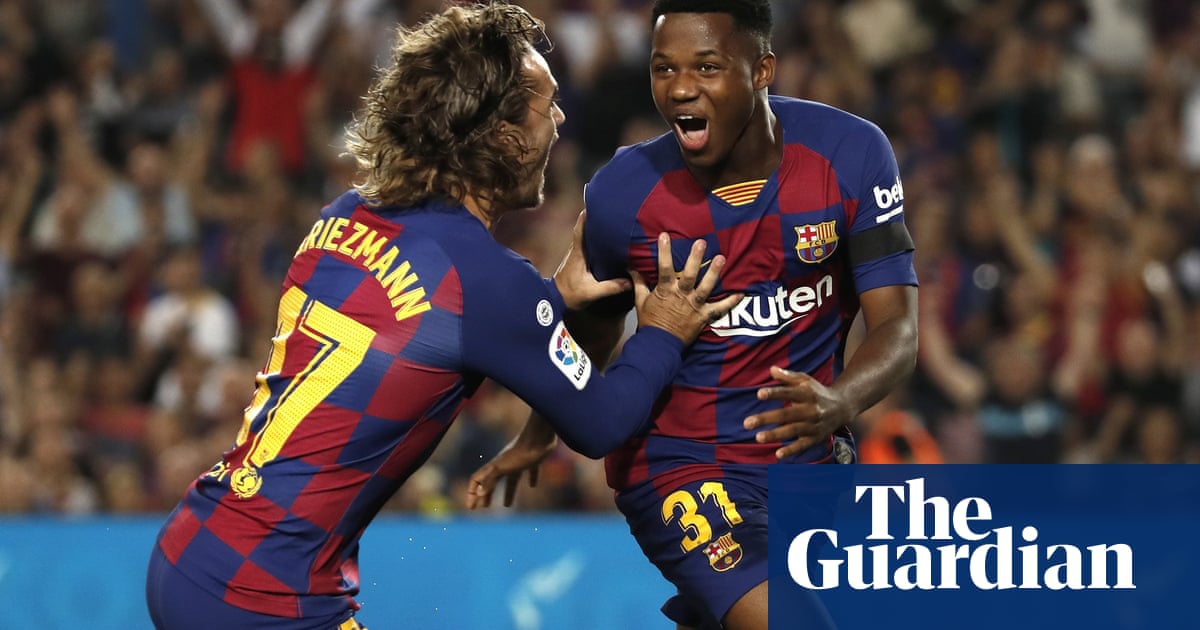 Barcelonas 16-year-old forward Ansu Fati continued his explosive start to life in the first team by scoring and providing an assist as the La Liga champions thrashed Valencia 5-2 on Saturday. Fati, who became Baras youngest goalscorer two weeks ago by netting at Osasuna, struck his first goal at Camp Nou to give the hosts the lead with less than two minutes on the clock by smashing a pass from Frenkie de Jong into the net.

The teenager then returned the favour by dashing in to the area from the left wing and teeing up De Jong to score his first goal for the club in the seventh minute. Valencia, playing their first game since sacking their coach Marcelino and replacing him with Albert Celades, pulled a goal back later in the half through Kevin Gameiro but Bara came flying back at them after the interval.

Gerard Piqu bundled the ball into the net in the 51st minute after Antoine Griezmann had hit the post before Luis Surez netted twice after coming off the bench. Maxi Gmez got a consolation goal for Valencia in stoppage time. The victory takes Barcelona, who are still missing their captain, Lionel Messi, through injury, on to seven points after four games, while Valencia have four.

[Fati] is a player that has something special, the Barcelona manager, Ernesto Valverde, said. He is a striker who is mature beyond his years. He trains like he plays. Today was a bit exaggerated, with him scoring and setting up a goal with his first touches. But we have to give him time. He is still growing up and has to handle a situation which is far from normal.

Real Sociedad,roared on by a record crowd in their revamped and completed stadium, ended La Liga leaders Atltico Madrids 100% start to the season with a deserved 2-0 win. The former Real Madrid player Martin degaard put the Basque side ahead in the first game at the renovated Reale Arena with a deflected shot in the 58th minute which completed a sweeping end-to-end attack.

The debutant Nacho Monreal doubled Sociedads advantage three minutes later, pouncing on a fumble by the Atltico goalkeeper, Jan Oblak, who later had to be substituted despite protests from the Slovenian after taking a blow to the head. Real Madrid are second behind Atltico after a nervy 3-2 home victory over Levante.

RB Leipzig came from a goal down to snatch a 1-1 draw against the champions, Bayern Munich, to remain top of the Bundesliga, a point ahead of second-placed Borussia Dortmund. Bayern, who host Red Star Belgrade in their Champions League group opener next week, got off to a perfect start when Robert Lewandowski struck in the third minute for his seventh goal of the campaign.

Yet, despite more than 75% possession in the first half, the Bavarians failed to make their dominance count as the hosts levelled on the stroke of half-time with an Emil Forsberg penalty. Bayern thought they had grabbed a winner in stoppage time but Niklas Sles header scraped the post and sailed wide.

Leipzig, who face Benfica in the Champions League, are on 10 points, with Dortmund, who crushed Bayer Leverkusen 4-0, on nine. Bayern are a further point behind in third.