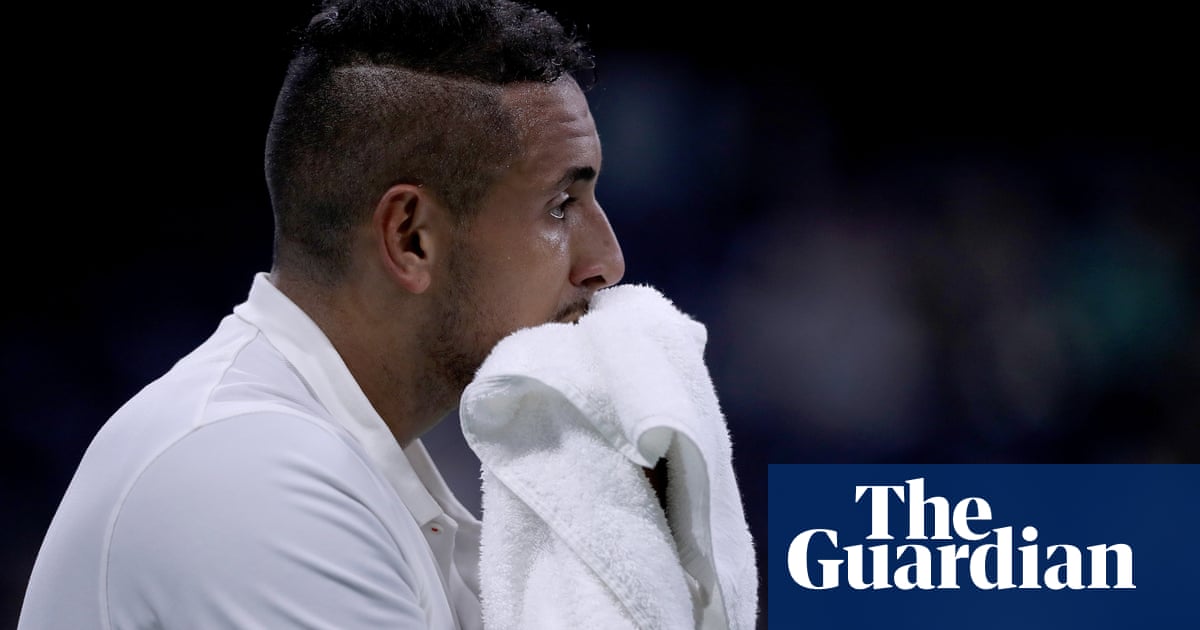 Nick Kyrgios has accused the ATP of being corrupt in the aftermath of his US Open first-round win over American Steve Johnson at Flushing Meadows.

The tennis firebrand was asked what he thought about being fined a record $US113,000 ($A167,000) for his spectacular meltdown in Cincinnati this month.

The ATP is pretty corrupt anyway. Im not fussed about it at all, he said in a development that will almost certainly force the governing body of mens tennis to suspend the Australian, having already said it was considering such a move.

I was fined $113K for what? Why are we talking about something that happened three weeks ago when I just chopped up someone first round of a US Open?

US Open officials had given Kyrgios the green light to play the final grand slam of the year despite tennis chiefs continuing to weigh up whether or not the temperamental talent should be suspended for his latest outburst in Cincinnati.

The ATP offered no time line around when it would make any decision on Kyrgioss fate when quizzed on the eve of the Open, which started on Monday.

Believed to be the biggest fine in the sports history, Kyrgios was slapped with separate penalties for an audible obscenity, ball abuse, verbal abuse towards the umpire, leaving the court and four counts of unsportsmanlike conduct during his explosive second-round loss to Karen Khachanov.

In addition to the fines, the ATP said it was looking further into what happened during and immediately after the match to see if additional action is warranted under the Player Major Offence section of the code and that could result in an additional fine and/or suspension.

But the 24-year-old was unrepentant after progressing to the second round at Flushing Meadows.

Have you ever sworn at someone before? he countered at a journalist. … Youre not an elite athlete. Asked if he was saying it was acceptable for elite athletes to swear, he said: No, Im just saying people get frustrated. It happens.

Earlier, Kyrgios delivered heaps of brilliant shotmaking and a sprinkle of controversy in his 6-3, 7-6 (7-1), 6-4 win that put him into a second-round meeting with Frenchman Antoine Hoang, who beat Argentine Leonardo Mayer.

Kyrgios was laser-focused for the first half of the match as he deployed a lethal mix of monster serves, stinging forehands and smart net play but nearly unravelled when he got agitated over a fan who interrupted his ball toss.

The 28th seed was serving at 4-4 in the second set when a woman trying to get to her seat entered his line of sight during his serve, at which point an annoyed Kyrgios asked aloud if she was alright.

Kyrgios then looked to the chair umpire who said he could not have prevented the interruption because he did not see it since he was focused on the players. But a clearly perturbed Kyrgios was not happy with that explanation and following a verbal exchange was given a code violation warning for an audible obscenity.

After Kyrgios held serve to go 5-4 up he resumed his back-and-forth with the umpire on the changeover at which point a clearly annoyed Johnson asked his opponent when he was going to play fucking tennis.

Kyrgios, who has repeatedly got in trouble for on-court actions and is known for his short temper, did not let the incident affect his sublime play as he settled right back down to business.

The Australian blitzed Johnson in the second set tiebreak where he showed his lighter side when he broke into a little dance after chasing down a dropshot he sent back for a brilliant crosscourt winner and a commanding 6-0 cushion.

It was pretty clean, Kyrgios said of the tiebreak. I knew it was an important set. If he got that set the match could have been different and wed still be playing right now.

Johnson, who was being thoroughly outplayed, did manage to finally earn his first break to get to within 3-1 in the third set but Kyrgios relied on his massive serve to carry him over the finish line.

Kyrgios was all business from the outset and when he held at love in his first service game for 1-1, he soaked up the first of many Aussie, Aussie, Aussie chants inside Louis Armstrong Stadium on the night. The Australian controlled the match with his serve as he won 88% of his first serve points and saved three of the four break points he faced.